U.S.-based companies made up nearly half of semiconductor sales in 2020, but U.S. fabs only “represented only about 12 percent of chip manufacturing, down from 37 percent in 1990,” notes the recently published SIA and Boston Consulting Group report. In December, the SIA predicted that global chip sales would increase by 8.4 percent in 2021. 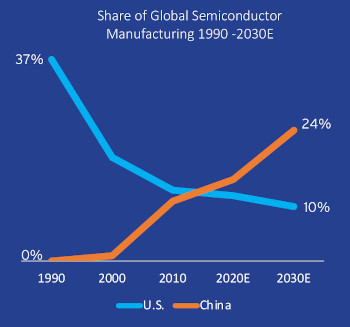 The top three chip manufacturing companies — Taiwan Semiconductor Manufacturing Co. (TSMC), Samsung, and Globalfoundries — are looking for ways to expand and increase production in 2021, as all three are anticipating a shortfall in “chip production time available.” In the past several weeks, automotive companies worldwide have been shutting down production due to chip shortages. The situation reportedly has impacted production lines at Ford, Subaru, Toyota, Nissan, Fiat Chrysler Automobiles Volkswagen, Daimler, and Audi.

A few weeks ago TSMC, the world’s largest contract chipmaker, stunned financial markets and analysts by increasing its manufacturing capacity investments by “at least a 47 percent year-over-year,” which amounts to more than half of this year’s projected revenue. Among other investments, the company is building a new U.S. chip manufacturing facility in Phoenix, AZ, capable of delivering 20,000 wafers per month, reports Reuters.

TSMC ended 2020 with record profits, and is expected to spend $28 billion this year on developing chips and expanding its production capacity and infrastructure for delivering chips globally. TSMC manufactures most of its chips in Taiwan, and has facilities in China and in Washington. The company manufactures Arm-based and other architecture chips for Apple, Qualcomm, AMD, and other large companies. TSMC’s new 3nm manufacturing process is said to be fully booked through 2024.

Samsung is also looking to invest $10 billion in new U.S. semiconductor manufacturing facilities, aimed at producing advanced chip designs, according to reports from Bloomberg.com, the WSJ, and other sources. Locations currently under consideration are said to include Phoenix, AZ, Austin, TX, and western New York’s Genesee County. The company’s current operation near Austin delivers 4.2 million wafers daily and collaborates with AT&T and others on telco, 5G, IoT, and robotics products. The company is eyeing this demand to expand their operations in the semiconductor industry.

More details regarding worldwide semiconductor market growth in 2020 are available in this Reuters.com article. The video of a recent webinar entitled “Turning the Tide for Semiconductor Manufacturing in the U.S.” from the U.S. Semiconductor Industry Assocation (SIA), can be viewed below: