Last Spring, DARPA announced a collaboration among “leading minds in security research and semiconductor design to focus on a problem of national importance.” Known as “AISS” (Automatic Implementation of Secure Silicon), the initiative aims to promote “revolutionary advances in design productivity and have a dramatic and positive impact on our electronic supply chain security.” 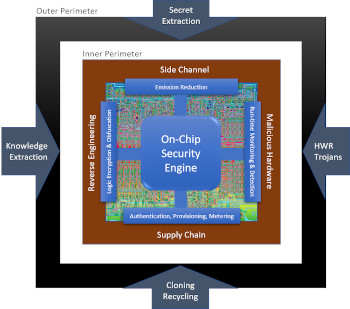 “When unsecure circuits are used in critical systems, the lack of embedded countermeasures exposes them to exploitation,” added DARPA.

Last month DARPA announced the addition of two semiconductor tech startups to its AISS team: CEVA Logistics and EDA vendor Verific. According to an EdaCafe report, the deal with Verific grants DARPA’s AISS community access to the company’s HDL and RTL chip-design tools, along with tools for simulation, prototyping, verification, synthesis, emulation, and in-circuit debugging.

This follows the August rollout of DARPA’s $1.5 billion investment deal with ARM, which gives DARPA’s research contractors deeply discounted access to commercial IP, design tools, support, and other services from Arm Research’s portfolio over the next three years. In an announcement, Arm discussed its goal to develop “a common set of SoC architecture, integration workflow, device manufacturing and provisioning assumptions” as part of DARPA’s “Secure Silicon Program,” and disclosed it is similarly working with the UK government’s Digital Security by Design program.

In a bipartisan effort, the US Department of Defense is trying to reduce its dependence on chip supply chains in Asia. Last July, Harvard’s Belfer Center for Science and International Affairs published a report, “Made in the USA: Revitalizing the Domestic Semiconductor Industry,” which examines the impact of China’s pursuit of semiconductor independence to the worldwide semiconductor industry and its supply chain. Download the complete 48-page Harvard report here [PDF file].

Share your thoughts on this topic, below... Cancel reply